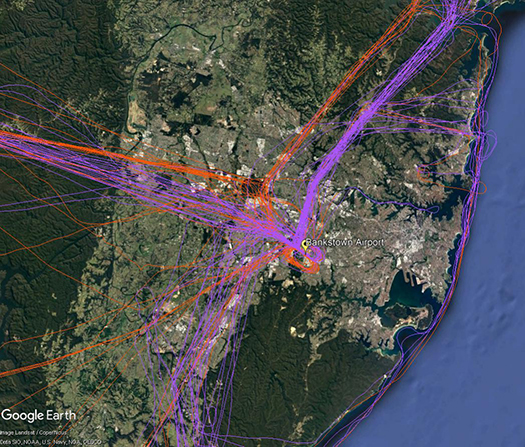 To and from the north

The two northern routes are shown in the image below. One is via Brooklyn Bridge, the Galston electricity substation, the water tank at South Dural and Prospect Reservoir.

The other route is a designated “lane of entry” that allows aircraft to come and go from Bankstown Airport without entering the controlled airspace of Sydney Airport or Richmond RAAF Base. It is also used by aircraft transiting from north of Sydney to areas south and south west of the city. This corridor of airspace has a ceiling height of 2000 to 2500 feet.

The lane of entry runs between Bankstown Airport and Patonga. Outbound aircraft head to Parramatta and past the Prospect to Potts Hill pipeline. Once north of the pipeline aircraft can climb to 2000 feet. Tracking features include the intersection of the M2 and Pennant Hills Road, the strobe light at Pennant Hills CBD, a covered reservoir at Thornleigh and the Hornsby CBD and railway sheds. The track then follows the eastern side of the M1 motorway (Sydney Newcastle Freeway) and onwards to Patonga.

Aircraft may turn east from the lane at Hornsby and travel towards the coast using the Baha’i Temple as a tracking feature. Once at the coast aircraft may track to Long Reef or conduct a harbour scenic flight or coastal flight.

In the image below the tracks of inbound aircraft are shown in orange and outbound are purple.