Sydney Airport – traffic management of arrivals from the north 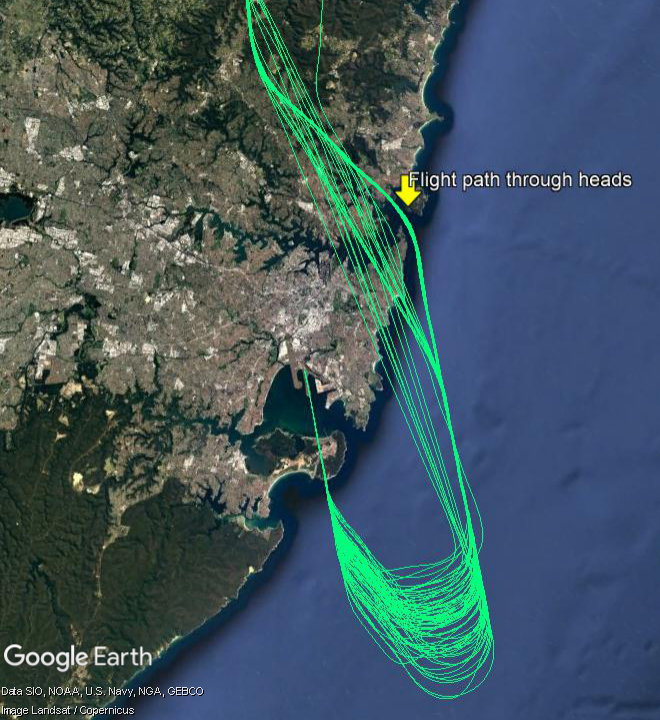 There is a flight path for aircraft arriving into Sydney from northern ports that brings aircraft through the Sydney heads and southwards down the coast, over water, to arrive on the easternmost parallel runway. This flight path is used when the parallel runways are being used in a northerly direction (“north flow”).

There are times when air traffic controllers need to take aircraft off this flight path to ensure they remain safely separated from other traffic and/or can be efficiently sequenced with aircraft arriving from the east, south and west for landing. When there is poor weather, or in peak periods when there is a high volume of traffic in the airspace, this is more likely to occur.

The image at right shows actual tracks of aircraft arriving into Sydney from the north and travelling southwards to land on the easternmost parallel runway.

When aircraft are diverted from the usual flight path they must be directed over land, and will pass over suburbs such as Rose Bay, Dover Heights and Point Piper. It is not possible to divert these aircraft further east, over the water, because this would create potential conflicts with aircraft that are departing from the easternmost parallel runway and heading north-east. The conflicts could occur because the departures and the arrivals would be at similar altitudes when their paths crossed. Aircraft taken off the usual flight path will generally be in the altitude range of 6000 to 8000 feet as they pass over the eastern suburbs. This is around twice as high as the jet aircraft that depart over the area.

Air traffic controllers are aware of potential noise implications for the community and do not take aircraft off standard routes unless it is operationally necessary. Unfortunately, when operationally required, this cannot be avoided.