Suburbs to the immediate west of Sydney Airport are affected by aircraft arriving to (“east flow”) and departing from (“west flow”) the east-west runway. 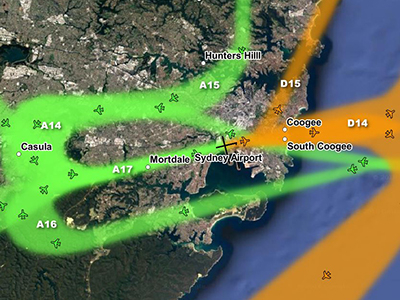 Sydney’s seasonal wind patterns mean that you are more likely to experience arrivals in the warmer months and departures in the cooler months. This is because aircraft need to take off and land into the wind. You are also more likely to experience traffic in non-peak periods when the east-west runway is used whenever possible for noise sharing purposes. Non-peak periods are generally 6:00 – 7:00am, 11:00 – 3:00pm and after 8:00pm. These times may vary, however. There will also be days when the wind conditions make use of the two north-south parallel runways impossible, and on such days you are likely to experience heavy levels of traffic for prolonged periods.

Arriving aircraft must align with the runway from a considerable distance out from the airport, and fly straight in. This means that aircraft arriving to land on the east-west runway will always fly over suburbs such as Picnic Point, Penshurst, Hurstville, Bexley and Rockdale. The following image shows actual tracks of arriving aircraft. Aircraft departing towards the west will turn to their heading when they reach 1500 feet (for jets) or 800 feet (for non-jets). As different types of aircraft have different climbing abilities, they will reach this altitude at different points after take-off and therefore begin their turns at different points in the air. This has the effect of creating a spread of aircraft as can be seen in the image below. If the aircraft is proceeding to destinations to the west such as Perth or south such as Melbourne it will maintain the runway heading for longer before turning.The following image shows actual tracks of departing aircraft. When aircraft are departing from the westernmost of the parallel runways, non-jets (turbo-prop aircraft) that are heading for southerly or westerly destinations will turn left after departure when they reach the altitude of 600 feet. This will create a spread of aircraft, taking them over suburbs such as Kingsgrove, Beverley Hills and Peakhurst. This is illustrated in the track image below. Learn more about how Sydney Airport runways are used