The inner suburbs of Sydney are affected by aircraft arriving to and departing from the parallel runways at Sydney Airport in “south flow” and “north flow”. 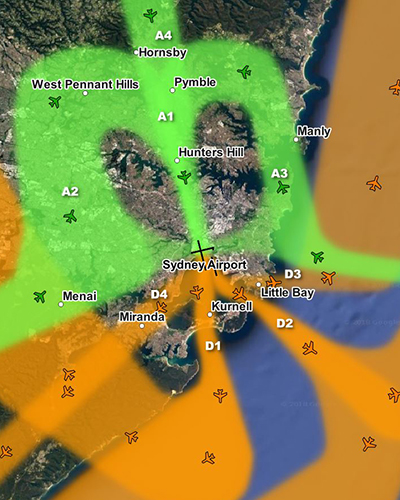 Arriving aircraft must align with the runway from a considerable distance out from the airport, and fly straight in. This flight path is labelled A1 in the top left image. When the parallel runways are used in a southerly direction, (south flow), this means that aircraft on their final approach to land on the easternmost parallel runway (Runway 16 Left) will always fly over suburbs such as Rozelle, Annandale, Camperdown, and Newtown, and those arriving to the westernmost parallel runway (Runway 16 Right) will fly over Lilyfield, Leichhardt, and Stanmore, for example. The image below shows actual tracks of arriving aircraft. When the parallel runways are being used in a northerly direction, (north flow), jet aircraft departing from the westernmost parallel runway (Runway 34 Left) will begin to turn to their heading when they reach 800 feet or 1500 feet, depending on which track they are taking. As different types of aircraft have different climbing abilities, they will reach these altitudes at different points after take-off and therefore begin their turns at different points in the air. This has the effect of creating a spread of aircraft as can be seen in the image of actual departure tracks below. This flight path is labelled D5 in the image at top right.

Non-jets follow a different procedure and turn very early after take-off before proceeding to the south-west to destinations such as Canberra. This flight path is labelled D9 in the image above right.

This image below shows the actual tracks of departing aircraft: Most aircraft departing the easternmost parallel runway (Runway 34 Right) turn to the east or north-east after take-off, avoiding the inner west. However non-jets bound for northerly destinations will continue straight ahead after take-off, passing over suburbs such as Newtown, Erskineville, Glebe and Pyrmont (labelled D6 in the image at top right). By the time they reach Pyrmont they will generally be within the altitude range of 2500 to 4000 feet.

Learn more about the runways at Sydney Airport and how they are used.