Circuit training is the first stage of practical pilot training focused on take-offs and landings.  It involves the pilot making approaches to the runway or helipad, touching down and then applying power to take off again.  This is undertaken in accordance with Civil Aviation Safety Authority (CASA) Regulations which are consistent with international practices.

How circuits are conducted

A training circuit consists of five legs – take-off, crosswind, downwind, base and final approach to the runway. 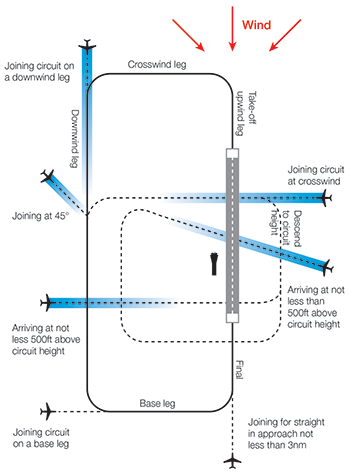 Aircraft take off into the wind, climb to 500 feet and then turn onto the crosswind leg.  They continue to ascend to 1000 feet and turn onto the downwind leg. Having turned onto the base leg the descent commences.  After turning onto the final leg and lining up with the runway the aircraft will touch down and take off again.

The take off and final stage of the circuit is flown into the wind, as this is the safest way for an aircraft to operate.

Air traffic control will determine which runways are used at any given time depending on the direction of the wind – this is because aircraft must generally take off and land into the wind for safety reasons.

When Runway 06/24 is being used, circuits are conducted on the north-west side of the airport and Ellis Lane and Cobbity will be affected by either the crosswind or base legs as shown in the image below. When Runway 10/28 is used, circuits are conducted on the north-east side of Camden Airport and parts of Ellis Lane and Kirkham are affected by the crosswind and base legs as shown in the image below. Training during both day and night is important for developing pilot competencies, as is experience with using different types of navigational aids.

Circuit training times are set out in the Noise Abatement Procedures for Camden Airport.  These are:

Due to flying training courses running on different schedules, some nights will have multiple aircraft operating and other nights none at all.

These times above apply only to circuit training, and not to arriving and departing aircraft which may operate 24 hours a day. When aircraft are arriving outside control tower hours they are required to fly a circuit before landing for safety reasons.  Therefore it may seem like aircraft are flying circuits outside hours when this is not the case.

Aircraft aim to fly at 1000 feet on the downwind leg. This is because aircraft are ascending on the take-off and crosswind legs and descending on the base and final legs.

While attaining 1000 feet on the downwind leg is the aim, in reality the altitudes of aircraft that are conducting circuit training will always vary.  Part of the reason for this is that the trainees are new to flying and factors such as their level of experience and even their degree of nervousness will affect the altitudes they can achieve.  Unfortunately the nature of circuit training is to teach new pilots and therefore this variation cannot be avoided.